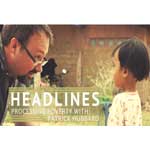 Earlier this week I read An Insufficient Resistance at Christianity Today. I concur largely with the content in this article, especially the author’s assertion that revolution apart from the Gospel is not sufficient. At our core, fallen people are lovers of self. Revolution without the transforming power of the Gospel degenerates into one group oppressing another. However, when I read articles like this one I find myself wanting to push against their premise. Often, when talking about social justice or revolution we build false dichotomies. We pit the Gospel against social change, at times even throwing allegations of “social gospel.”

As Westerners we like dichotomies, living with either/or is more comfortable than trying to live within the tension of both/and arguments. The good news that Jesus proclaimed was the gospel of the kingdom. I did not grow up in church and came to know the Lord as an adult. The gospel I responded to was that Jesus died for my sins so I could go to heaven. While a glorious truth, it doesn’t account for the fullness of the good news of the kingdom.

The gospel of the kingdom is that, in Christ, God is overturning the fallout of the sin which began with Adam and Eve. He is restoring all things to His original intent, including mankind’s position of eternal fellowship with God. The gospel of the kingdom is the gospel of revolution! In his sinless life, atoning death, and glorious resurrection Jesus was given all authority in heaven and on earth. The prince of this world has been defeated and the Church, by the power of the Spirit, under the authority of King Jesus, and for the glory of the Father, is tasked with continuing the revolution–to usher in the kingdom to every corner of the earth!

This kingdom-centered revolution advances against the darkness and brokenness of this fallen world. It does so by its own principles, demonstrated by our King: we advance by death. When citizens of the kingdom, the future rulers with Christ, deny ourselves, daily taking up our cross to follow Jesus, then God’s plan of restoration advances. Certainly this is the opposite of a worldly power-centered revolution! As we, understandably, seek to distance ourselves from glorifying the fallen, godless understanding of revolution, let us not forget the implicit revolutionary nature of our King and his Kingdom!