Story of Transformation in Brazil 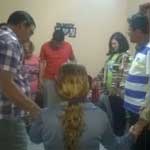 We love sharing first hand testimonies of the work the Lord is doing among our church plants. This month we have story directly from our church planters who work in the Guarita community (Brazil), Gilmar and Lizandra. (This letter has been translated and edited for clarity and length)
–Aleah Marsden, LBM Communications Director

We met Dona Eva and her family in a moment of complete desperation. Her son, Juliano, was addicted to drugs and his life was being threatened; he had been informed that if he did not pay his dealer R$100.00 (approximately US$30) by 3pm that afternoon he would be shot. My wife, Lizandra, entered their home at 2pm led by, Édila, a member of our church. Juliano’s mother was hopeless and tired of this lifestyle, tired of giving him money to pay his debts, when she witnessed no real attempt by him to give up drugs. 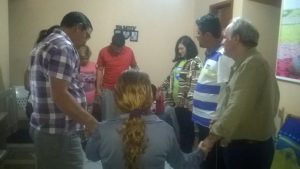 Lizandra prayed for the family, and for wisdom and direction on this issue. After praying, Dona Eva had calmed down and we advised her to pay the debt one last time–we knew the dealers meant business and would kill him, as this had been happening around the neighborhood lately. We encouraged her to consider trusting God, to give her burdens over to him. She agreed and we began a prayer vigil for Juliano.

For some time he still caused problems for her, they went through some moments of crisis, he broke many items and furniture in the home, but did not hurt anyone. Dona Eva continued to trust God even though at times she struggled to believe Juliano would ever change. We continued to encourage, share advice, visit their home, and pray with them and for them.

Juliano decided to move away to get off the drugs. He returned sober about a month later with his girlfriend, and has not been using drugs. His appearance was clean and we saw evidence that he has been freed from the bondage of addiction. He has also been attending church, something his mother had not believed would ever happen.

We praise God for Juliano’s life! He has been witnessing and sharing his incredible testimony about the changes in his life. We believe in the great power of God working through our faith and honoring his mother who has been suffering and praying for her son’s salvation. She is thankful for a time of peace. Please continue to pray for this family and Juliano’s salvation.

Give to South America Church Planting and Pastor Training