Finding Life at a Funeral

Their goal had been set: work hard and stick to the savings plan. If they kept focused and committed they would be able to retire at 45; free to pursue their dream of traveling the world together. He worked his way up from maintenance to regional manager of a large hospitality company. She worked and pursued her degree. This dedication meant long hours at work and school, leaving little time for newlyweds Patrick and Barbara to spend together.

Having been raised Catholic, Barbara felt a stirring of desire returning to attend mass on Sundays. However, with their time between work and school so limited, Patrick began to resent Barbara’s spiritual exploration as it took up long hours of precious time they could be spending together. It became a source of contention in their marriage, and Barbara wasn’t passionate enough about it to fight over it.

She was learning one of the most important lessons of marriage: choose your battles.

Patrick had not grown up in a church attending home. He didn’t really have much interest in spiritual things. It’s not that he specifically disliked the idea of Barbara attending mass, it just seemed like a waste of time.

In 1999 Patrick’s grandmother died. The family gathered together for the service. He was pallbearer and seated at the front of the church, while Barbara took a seat a handful of rows behind. Much to their surprise–and to this day Patrick isn’t sure how this happened–a fiery Baptist preacher presided over the service. The preacher not only used this opportunity to honor Patrick’s grandmother, but he also preached the gospel. He presented the message and led the group in the sinner’s prayer.

The Holy Spirit gave those words of life spark and trajectory.

They hit Barbara square in the deepest part of her heart. There, during the funeral service, she committed her life to the Lord who had been pursuing her before she knew him. Through the rest of the funeral, then the graveside service, and then the wake, Barbara wondered at this new life sprouting in her.

And she wondered how Patrick would take the news.

Sitting across the table from him at dinner that evening, she tried to work up the courage to tell him. How could she bring this up in a way he would understand? This wasn’t exactly going to naturally come up in the conversation. Her stomach twisted nervously. Patrick seemed distracted, distant. It had been a long, emotional day. Maybe she should wait to tell him tomorrow.

“There’s something I need to tell you,” Patrick says just as Barbara starts to speak.

“So, I think I became a Christian today,” Patrick begins. He then proceeds to tell her about how the preacher’s words at the funeral service had struck a chord. How he had prayed the prayer and committed his life to Christ.

Unbeknownst to the other, they had each become Christians at the same time, the Spirit using a single moment to bring them both into the kingdom.

Barbara excitedly relays her salvation experience as well. They finish dinner and sit down at the computer together to begin researching local churches.

They have no idea what the future holds, how difficult parts of this journey would be, or how this would upend their comfortable lives and retirement plans. They’ll all too soon be faced with the reality of counting the very real cost of their devotion.

But here in this moment, on this day, grief mingles with hope. Expectant joy abounds. And surprising new life was discovered in a most unlikely place: the middle of a funeral. 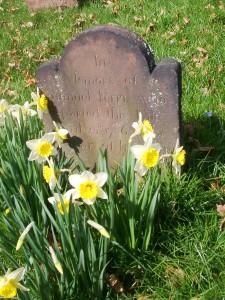