He Drew Them Before They Knew Him

I don’t know if it’s because I’m a writer or a story-junkie, but I love hearing people’s testimonies—especially about their lives before Christ. Not once have I heard someone talk of their pre-conversion life without mentioning that in hindsight they can see how God was drawing them to Himself all along. It reminds me that He is truly after us. He seeks us out. Whether He uses a dramatic come-to-Jesus moment or a more gradual wooing of a soul, even when we did not know Him He moves toward us.

Bárbara grew up in Brazil and, though she attended Catholic school, had not come into a saving relationship Jesus Christ. Patrick was from a working class family in rural Bedford Country, Virginia who was uninterested in religion. Their stories intersect when Barbara enrolls in an exchange student program.

Hoping to land in London or another exciting locale, I can only imagine the letdown it would have been to instead discover you’re being sent to Virginia in the United States. As it would turn out, she’s placed at the same high school as Patrick. The high school sweethearts plan to marry soon after graduation.

They decide to get married in Brazil. Up to this point in life Patrick had never traveled more than a couple states away, and now he would be traveling to another continent! 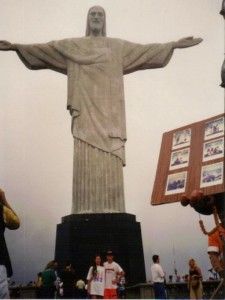 Having grown up in the city of Porto Alegre, Bárbara was accustomed to witnessing poverty and had even done some volunteer service when she was in school. Though they did not yet know Christ, Barbara told me that even then she could see in Patrick a special compassion for those in need. As they would walk to the market they would pass homeless people and Patrick felt compelled to pick up extra bread to hand out as they walked back home. It was the first time in his life he had been confronted with homelessness.

Though it was summer back in the States, in the southern hemisphere it was winter. Porto Alegre is located to the far south of Brazil and sees temperatures in the 50s during the day, occasionally dipping to as low as the 30s at night. On their drive home one evening, Patrick’s attention is caught by two primary school aged boys shivering in tank tops and shorts on the street. He asked Bárbara why they would be out this late dressed that way? Once again, compelled to action, they talk to the boys and ask about their situation. They were very poor and their mother had been hospitalized. The boys had nowhere to go and were living on the streets. Patrick and Bárbara returned home and gathered warm clothes, supplies, and food to give them.

Unbeknownst to Patrick and Bárbara, a seed has been sown. They will both look back on experience later as a signpost pointing toward the future ministry God is leading them into. However, at this point in the story, they don’t know Him. They head home and go on with their lives, committed to working hard and saving smart so they can retire at 45 and travel the world. They have no idea that the Lord is about to call them to Himself in an incredible way.

This post is part of a series telling the story of the Lord leading Patrick and Barbara to found Living Bread Ministries. For more: Who Knew Where A Tweet Would Take Me