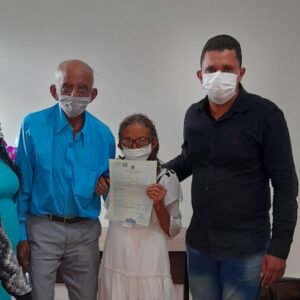 We launched Living Bread eighteen years ago to plant churches and meet needs in some of the most impoverished communities in the world. A year later we began our first church plants in southern Brazil, and since that time we have expanded from the southernmost state into three additional states, two of which are in northeast Brazil. We talk a lot about our mission from the big-picture perspective, which sometimes means we miss the multitudes of simple ways the Lord uses our work to transform lives.

I would like to illustrate this by sharing a quick story from northeast Brazil. Antônio João (89), Belina Jucelina (87), and Davi (50), their special needs son, live in a very small town called Poço da Pedra. The couple were caretakers of a small chapel next to their home. The chapel had been abandoned for years but they continued to maintain it as best they could.

Pastor Daniel, our lead church planter in northeast Brazil, heard about the couple and the little chapel and decided to visit them. Daniel is planting multiple churches in the northeast simultaneously. He serves much like an old Methodist circuit rider, though he rides a motorbike. Daniel visited them to discuss the possibility of utilizing the old chapel for a church plant, and the family was excited for the possibility. After talking with them, Daniel realized they had professed faith in Christ over 60 years ago but had never been discipled.

The couple lived together but had never been married. This is common in impoverished communities because the people do not have the financial resources to pay the fees for marriage documents. They often do not have an ID, so they cannot get a marriage license even if they can afford it. This problem is compounded for people like Antônio and Belina who are uneducated and cannot navigate the bureaucracy to even apply for their documents.

Pastor Daniel immediately began working on the documents for them and on January 14th of this year they were legally married. A couple of weeks later they had a religious ceremony in the little chapel they have been taking care of all these years. On May 8th the couple and their son were all baptized. Daniel has continued to disciple the family, and we renovated the little chapel which has become the meeting place for our church plant in Poço da Pedra.

This is a single story of how the Lord is using Living Bread to impact lives. It is beautiful in its simplicity. Nothing fancy. No bells and whistles.Just faithful ministry in neglected places. Will you consider making a year-end investment in this work so we can continue to make an impact among the global poor?  We still need $95,000 to match the donations we received last year.  Your donation to Living Bread can help us continue our ministries in both Brazil and Thailand.  Please contribute here today. We are so thankful for the partnership of so many! Would you join in supporting Living Bread this year?